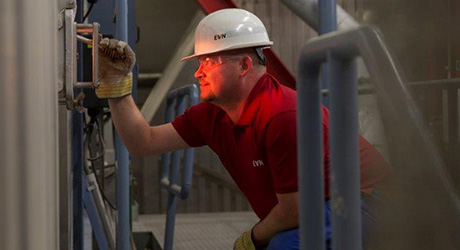 The thermal recycling of waste benefits plant operators on their path to a more environmentally friendly CO2 balance. It protects the environment and is a valuable source for generating renewable energy.


An excellent example of thermal waste recycling is the MSZ 3 plant, which is the largest of three waste incineration plants in the city of Moscow.

Each year, the Russian capital accumulates around 3.5 million tons of solid domestic waste, including bulky waste. About 800,000 tons are burnt in the city’s waste incineration plants, almost half of that in the MSZ 3 plant constructed by our parent company, EVN. Roughly 2.7 million tons of Moscow’s domestic waste is still stored in landfill sites, including products which contain highly toxic materials such as fluorine, chlorine, cadmium or mercury. The depletion and decomposition processes, which can take as long as 300 years, cause pollution of the air and of drinking water.

This means that these waste disposal sites are a long-term hazard for the environment. They destroy ecologically valuable countryside and represent an incalculable risk for future generations.

With a capacity of 360,000 tons per year, the MSZ 3 plant became operative after a construction period of only two years. Since then it has made an important contribution to the ecological treatment of the large amount of domestic waste produced in Moscow.

The treatment of the delivered waste is ecologically sound, and recycling is carried out to the most up-to date technical standards. The non-degradable items of waste are extracted in a multi-phase flue-gas purification plant. The remaining organic pollutants are destroyed at temperatures of over 1,000 °C.

The energy harnessed in the waste is fed into a power / heat cogeneration plant, which is attached to the Moscow heat network and produces electricity and district heat for 48,000 Moscow households.